How Youth Are Using Music to Promote Social Change in Lebanon 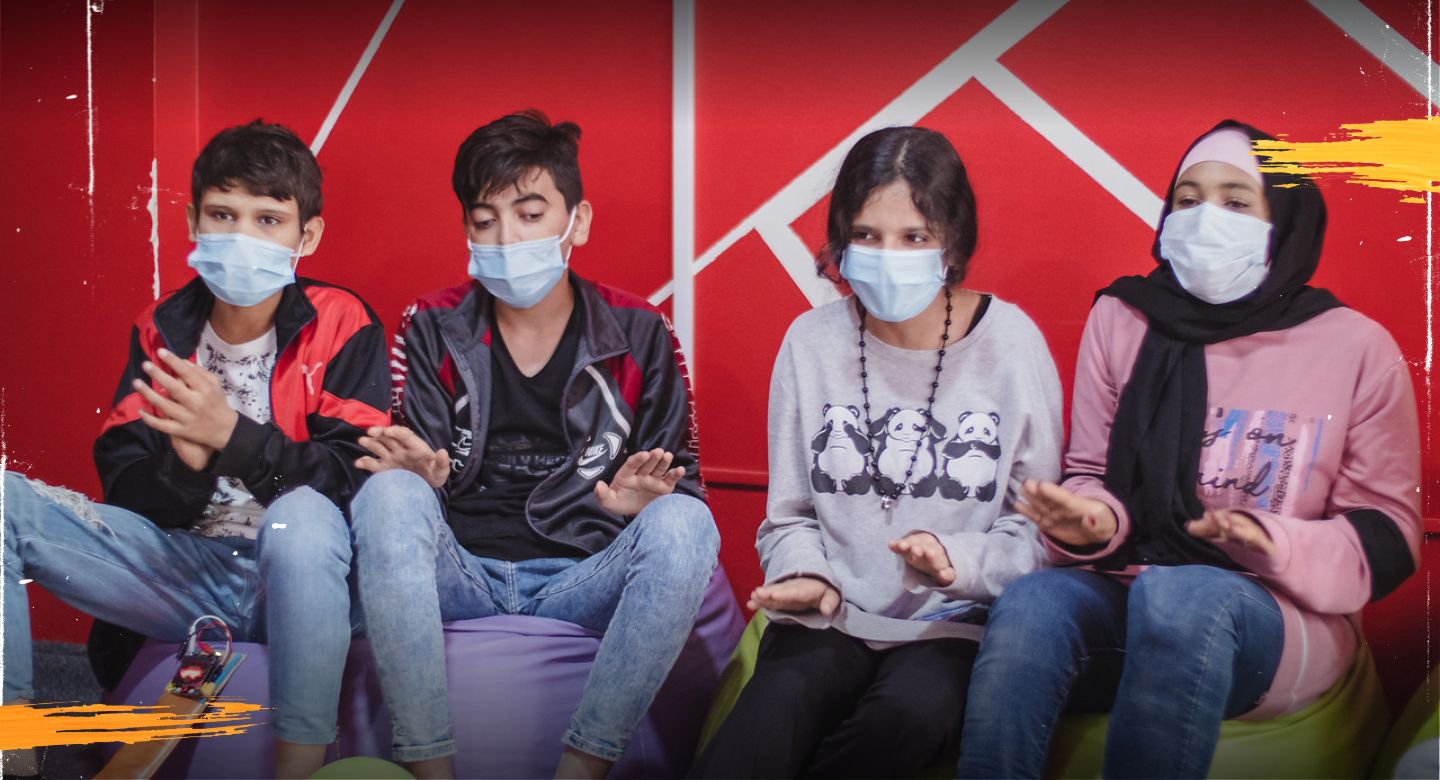 For many of these children, Lebanon is not their first home. Their families fled here as refugees to find safety after conflict rocked their communities and disrupted their lives. For others, a recent economic crisis in Lebanon caused them to drop out of school to work in support of their families. Still others are struggling with homelessness, living on the streets and doing their best to survive on the money they can make doing odd jobs.

But every week, they know they’ll have a safe space where they are able to gather, talk about the challenges they face, find support from their peers, and express their emotions through music – at a Music for Social Change session. Organized by Right To Play, but led by the children themselves, these sessions empower children in a safe environment where they can receive individual psychosocial support. Then, they use what they’re learning to identify inequalities in their community and raise their voices to advocate for change.

“Even though we are refugees here we always try to adapt.”

When Raghad, 15, first joined the Music for Social Change program her self-confidence was at an all-time low. She was six years old when her family arrived in Lebanon as refugees from Syria. Her family struggled with poverty and lived in an area of Beirut that is known for human trafficking, drug abuse, prostitution, and a high population of children who live on the street. As a refugee, she already felt like she didn’t belong. But she was constantly reminded of her differences by bullies who teased her for being Syrian and because she has an amputated leg.

“[When Raghad lost her leg] my spirit was crushed. But when I saw how strong she was, I became stronger. And now she is better and back to school,” says Amal, Raghad’s mother.

Through the program, Raghad started interacting with other youth who wanted to celebrate their differences and work together to raise awareness about the challenges refugees face. As she learned practical musical skills, Raghad’s confidence grew and she developed deeper friendships with others. Now she and her friends raising their voices about issues they care about.

“My friends and I created a song around our rights and needs. We wanted to share our message with the world. Even though we are refugees here we always try to adapt,” Raghad says.

The Music for Social Change program provides psychosocial support to youth like Raghad (left) and Ahmad (right). Attending helps them build skills like leadership and communication and encourages them to speak out about the challenges they face every day.

For Ahmad, 17, growing up in Lebanon has not been easy. Like many his age, Ahmad has struggled with feelings of hopelessness and depression around what the future might hold. He lives in an area of the city that has a history of conflict dating back to the Lebanese Civil War, where shootings and fighting still cause fear and unrest for locals. The area is also known for incidents of racism against other nationalities.

“From the day I was born I wish I was born in another country. There, children do not have to worry about anything except their education. Here, we worry about securing water and working to support our parents. When we wake up in the morning, we face many challenges. We get dressed in the dark since there is no electricity, no running water,” said Ahmad.

When Ahmad joined the Music for Social Change program, he started to feel hopeful that he might have a role to play in making his community a more peaceful place. He and his peers decided to write a song that would help bring an end to an issue they had all experienced – violence in schools. Through their music, they encourage teachers to see students as individuals who also deserve respect and to stop using corporal punishment. 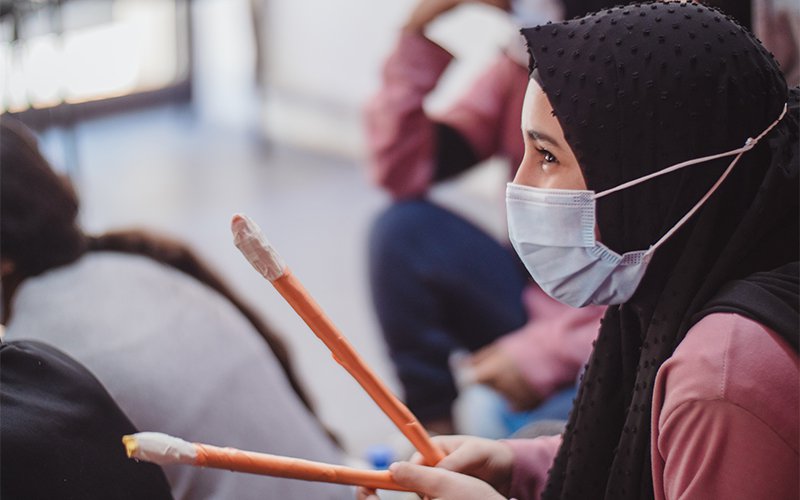 In the Music for Social Change program, children practice musical skills and apply them to composing and writing songs about social issues they want to address.
DONATE TODAY

“We use music as a tool to empower these children.”

Janine Chehade, a Right To Play Project Officer who has worked with these youth for the last two years, has seen the difference that this program has made in their lives – the knowledge that they are building around their rights, their appetite to become advocates for change in their communities, and the unique ways they use music and creativity to express themselves.

“We’re talking about words coming out from the youth where they are demanding that they have the right not to sleep hungry, that they have the right to access schools. They identified their topic. They created their song. They wrote their lyrics. They composed the melody. They were able to raise their voices and really talk about these issues,” says Janine.

Last summer, Janine and her team saw an opportunity to take the program to another level by competing in a global music challenge hosted by Strawbees, an educational technology company. The challenge invited children from around the world to build instruments using “music through robotics” kits and submit videos of themselves performing a song on their creations. Using the kits and recycled materials, two groups of youth from the Music for Social Change program built their own instruments and submitted their original songs titled “Violence at Schools" and “the Right to Education”. 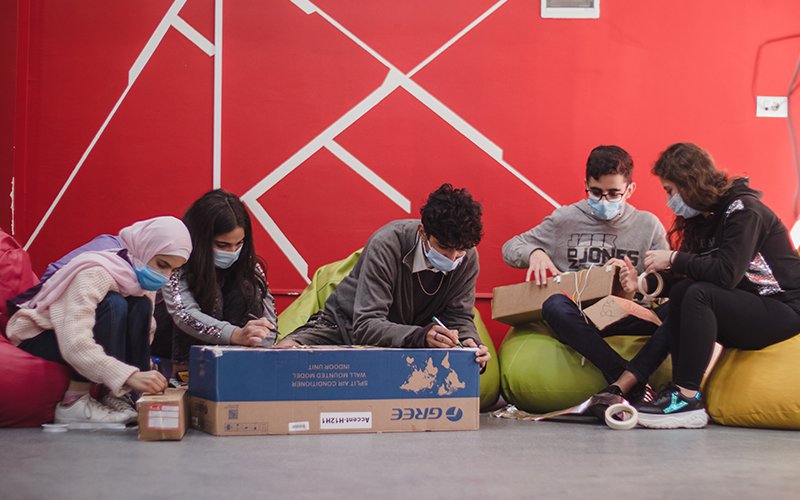 “This is the first time in my life I won anything.”

The pride and elation the children felt still glows on their faces as they talk about hearing the news of their victory. Each one lights up when they describe the moment.

“When we were informed we won the competition, I was so happy and my friends were so happy. We danced and laughed. We were so thrilled we won,” says Raghad.

“When I heard the news, I was filled with joy. This is the first time in my life I win anything,” says Hani, a 15-year-old boy in the program.

“We loved this experience. We enjoyed it so much. We achieved and succeeded. It was great and beautiful. We loved this,” says Hiba.

And much like this lingering joy, the youth will carry the skills, friendships, confidence and hope they’ve built with them as they continue to advocate for themselves as they step forward into their next challenge.

STAY CONNECTED TO YOUTH IN LEBANON